Valley of the Gods Utah

Why Road Tripping to

Valley of the Gods Is a Must Do

It’s just a simple non-descript green highway sign on U.S. 163 in southeastern Utah near Mexican Hat: “Valley of the Gods.” Pointing to the edge of the road, it appears to plop vehicles off the side of the road into Lime Creek.

Not a national monument or park, Valley of the Gods is publicly-managed Bureau of Land Management territory in a setting surrounded by four national monuments, two national and Utah state parks, and the Glen Canyon National Recreation Area with fingers from Lake Powell. It’s a land of great beauty that epitomizes both the American West and science fiction movie landscapes. Tighten your grip on the steering wheel and turn onto the drop, while everyone else gasps at once.

They will be gasping not at the steep drop down to ford the creek, but from the towering Seven Sailors Butte filling the earth to the sky. Let the passengers gawk, drivers need to watch the Lime Creek crossing. This is the eastern beginning to a 17-mile twisting, climbing and turning, but readily accessible drive looping through a valley of dramatic red rock buttes, rolling desert landscape and a smattering of brush and wildflowers.

Valley of the Gods Road, also known as BLM Road 226, stretches between U.S. 163 north of Mexican Hat, Utah, near the Arizona-Utah border and hits Utah Route 261 just below the Moki Dugway, which with a right turn is the gateway to Natural Bridges State Park, Glen Canyon National Recreation Area and Bears Ears National Monument . A left turn heads towards Goosenecks Utah State Park. In the morning, enter from U.S. 163 in the east. This way, the sunlight highlights the buttes. In the afternoon, start from the west entrance off S.R. 261.

From "Valley of the Gods, Utah.,"  DesertUSA 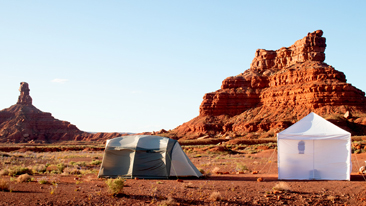 Readers' imaginations have been captured by the writing of Eric Jay Toll for more than three decades. Eric travels the American West and Southwest sharing experiences and adventures in Arizona, California, Colorado, Nevada, New Mexico, Oregon, Utah, Washington and Wyoming.

Eric's stories incorporate the experience of those around him as well as his own perspectives and observations. His work appears in a variety of publications in print and digital media.

Eric lives in Phoenix, Arizona, with his chocolate Lab, Chaco, an organic garden, his woodshop, and his dream kitchen. He is also a bread maker and has 120-year-old sourdough starter that has its own story.

Eric is the Communications Manager for city of Phoenix Community and Economic Development Department. His career marries his experience as a journalist and writer with three decades of experience as an economic developer, and city and county planner.

Eric covered the economy for Phoenix Business Journal through the end of 2016. His beat encompasses economic trends, economic development, banking and finance, infrastructure and transportation, and utility policies. His work appears online and in the print edition of the Journal.

The beat coverage brings Business Journal readers exclusive and in depth coverage of economic development deals, breaking news and a plain-language look at economic trends. Exclusive stories include articles about the event and the reasons international cybertechnology company Kudelski decided to move its headquarters to Phoenix, and how Valley economic developers closed the deal to site Rogers Corporation corporate headquarters in the city.

From 2012 to 2014, Eric was the senior correspondent for the Arizona Builder's Exchange, a semi-weekly publication for architects, engineers and contractors in Arizona. He covered news of the development industry. Eric broke development stories of the 90,000 square foot Wells Fargo building, recent research and development facility expansion at Intel, the General Motors Information Technology Innovation Center, a $300-million addition to the cancer center at Mayo Clinic, and the $350-million addition to the Banner/MD Anderson Cancer Center.

Traveling Dad is where Eric's travel reports can be found on a regular basis. His style tells a story and places the reader right into the setting with both words and stunning photography. Eric's travels from around the West, the U.S. and Canada, have been highlighted on the travel site and its affiliate, TravelingMom.com.

His work is now also in DesertUSA.com. Eric also writes for Arizona Commercial Real Estate magazine (AZRE) and Greater Phoenix inBusiness magazine. He wrote feature stories and a pair of cover stories for inBusiness. His work for AZRE includes a November 2013 feature on medical office buildings and a supplement for the Arizona Association for Economic Development.

When the American Planning Association brought 6,000 members to Phoenix for its annual conference , Eric wrote the Planning Magazine cover story about his home city.

Prior to bringing his writing brand to the Business Journal, Eric's travel work appeared in USA Today, Visit PHX Valley Guide, the former Examiner.com, and Striped Pot magazine of the Southwest. He has been featured on Trails.com, LiveSTRONG.com and GolfLink.com.

His business and technology articles were published in the American College of Cardiology's Cardio Source World News, eHow Money, and the former Examiner website.

A complete portfolio of all Eric's online publications can be seen on Contently.

In addition to journalism and feature stories, Eric is a professional copywriter and technical writer. He is an experienced instructional designer, creates dynamic PowerPoint presentations, and writes strategic marketing and proposal communications.

Eric joined the city of Phoenix as Communications Manager in the Community and Economic Development Department to start 2017. He continues as a travel writer for TravelingDad.com and other publications. Through 2016, he was a multiple award-winning journalist covering the economy for Phoenix Business Journal. His experience includes a stint as a news writer for CBS radio and work at radio stations in Michigan, Arizona, Oregon and California as well as an advertising agency in California.

He changed careers in 1980 and spent three decades in urban and regional planning, and economic development for communities and  private consultancies in California, Nevada, Utah and Arizona. He returned to journalism and professional writing in 2009. Eric attended college at Southern Illinois University, Sonoma State University, California, and Paradise Valley College, Phoenix, for degree programs in broadcasting, planning and environmental studies, and information technology.